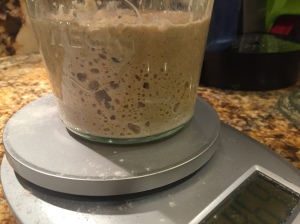 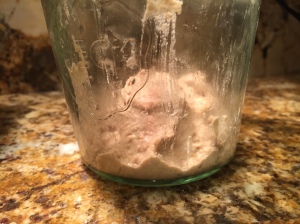 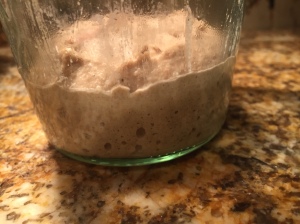 Above are the befores, right after a feed, followed by the after photos, after the rise.  It’s been 10 or so days since I began this starter.  I learned through frustration that you can’t rush it.  At one point I thought maybe it needed a dash more liquid, and that seemed to help.  Then I learned that adding more liquid is only good for quicker rise but not for developing strength.  So I never added more than the 40g.

I also had the idea to see if leaving more starter in helped growth.  It seemed to, but, again, I only did that once.  Once I trusted that my flour and water was really turning into starter, I went right back to the basics.

An experiment I did yesterday was to keep the hungry discarded portion of starter in a separate weck jar.  When it was time to feed the real starter, it smelled like ripe fruit, not bad, not just like dough.  I took a whiff of the over hungry portion in its jar, and it smelled FOUL.  Alcoholish and really bad.  I tossed it, which was what I was going to do.  It hadn’t grown as much as the fed starter.

If I had all the bread making equipment, I think my starter would be ready.  It’s definitely hungry 3x in the 24.  The smell is never even slightly vinegary, though, so I think it’s ok to keep developing it for strength.

While day 6 showed lots of bubbles, there was no visible rise.  By the end of the day there was a harder “skin” formed over the bubbling mass below. 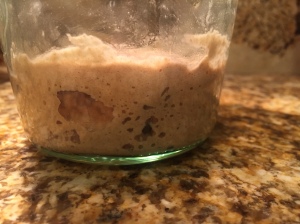 At at the very end of the day I decided to feed it as if it had risen.  The “skin” reincorporated nicely into the new mix.

In the morning I found wonderful activity.

More rising apparent by the afternoon, some 16 hours after the feed:

Day 6 of Sourdough Starter: After Long Wait, Maybe Some Rising

And this morning we see some real evidence of change. 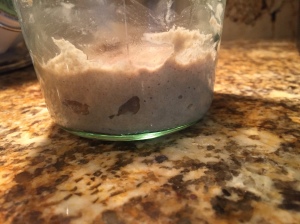 That was after 12 hours since I added more water.

Three hours later, we see this:

While it it isn’t doubling, the “cat eye” bubbles sure are growing, and pointing upward.  Keep hope alive.

When I took the starter in its jar out of the oven in the morning it was altogether too warm.  There had been no visible activity.  I fed it anyway.  The thrill is really gone from making starter.  I need a sign.  Here is the starter on day 5 I believe after feeding in the morning.

And here it is after seven hours on the counter. 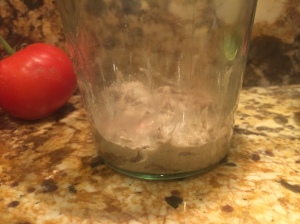 It it shows very little change and smells like plain flour and water.

In my dough depression, enhanced by my kombucha two gallon jug springing a leak, I decided to try one thing I had read about online.  That at the very start, starts sometimes need a bit more water to grow the yeast.  I took my bottle of room temp spring water and drizzled a little in.  Didn’t measure it.  Stirred it up.  It was stirrable, not as stiff as before.

Went to bed with small hope.

This photo above was taken 8 hours after the feed.  Doesn’t it look exactly the same, maybe the bubbles a bit bigger, as the post-feed shot?

I’ve decided to try the oven light warming situation overnight to see if it helps. 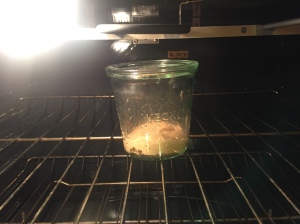 After Day 4 feed of sourdough starter

This is right after I removed all but 40g and fed the starter on its 1:1:1 diet.  Hoping being placed under a counter light that gives off warmth might give this little fellow some hope.  And growth.  Note for the future: the big “bubble” on the bottom was already there.

The Wicked Day 3 of Sourdough Starter 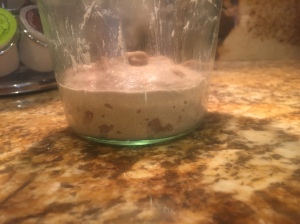 The third day curse affected my happily bubbling starter like it does so many.  This photo is 28 hours after the second feed, and it grew more in the last four hours than in the previous 24.  It darkened.  It smelled vinegary and not that pleasant.  But no major rise at all.  I gave up waiting and fed it again.

I am wondering if temperature is in play.  It’s under 75 degrees F in the kitchen and may be closer to 70 than 75.  I may need a thermometer.  Now I am using nature’s thermometer, a jar of coconut oil (goes liquid at 75 degrees F).

While the the starter in the morning was still quite risen, the top dome had collapsed and the starter no longer smelled good.  The sweet smell was gone and there was a sharp, unpleasant boozy scent.  The baby was hungry!

Again I tossed what was over 40g, and added the new flour and water and mixed.

Starter going strong only four hours after the first feed

I was was shocked to see how quickly this baby took off.

Maybe I was supposed to feed it soon thereafter but it was after midnight.

After 24 hours, bubbles were all around the sides of the new starter and it smelled delightfully sweet and fermenty.

I removed enough starter to leave only 40g in the jar, and added 40g of my organic rye mix and 40g room temperature spring water.  Below is the starter after this first feed (photobombed by Pez penguin).